Miraculous Control Of The Well No. 2 Of Soroush Square & Appreciation Of The Hand-In-Hand 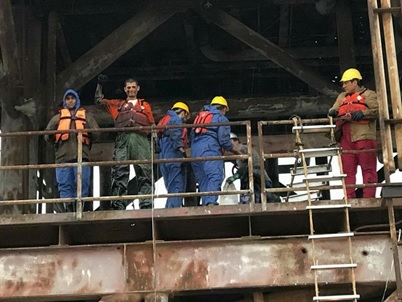 With great effort and exemplary speed of action, the crisis management team of Bahregan region on 1397/10/03,

The eruption of well No. 2 in Soroush Square before the start,

was miraculously controlled & caused catastrophic damage to the environment and national resources. Prevention was done.

According to the public relations of the Iranian Offshore Oil Company, Bahregan region, at 9:00 AM on Tuesday, December 18th, after the announcement of the platform's report that a severe leak was observed from the old well No. 2 in Soroush Square, the crisis management team consisting of production operations, exploitation engineering and complex Soroush and Nowruz, HSE, well-drilling services, drilling engineering, well completion engineering and offshore operations, by holding emergency meetings by video conference with platform officials, defined and announced the plan for severe well leakage control operations.

Accordingly, immediately with the coordination of the Kharg region, the repair ship "Champion" was sent to the location of well number 2. Then, the mentioned team traveled to Soroush platform by helicopter to evaluate and feasibility of the access routes to the well, in order to reach a single decision after observing the accident site by presenting different scenarios. In the second session of crisis management, after seeing the available documents, the group immediately went to the location of well No. 2 with the ship "Karen 3" together with the officials of Soroush platform, and different scenarios for accessing the crown of the well and eliminating leaks were determined and prioritized. Accordingly, all safety requirements and equipment required, such as the readiness of fire-fighting ships, the sending of foam and OSE from the area and their distribution on the vessels, the preparation of the oil siege canvas and the oil-collecting skimmer before the arrival of the Champion.

After the arrival of the "Champion" ship, despite the dark weather and very bad weather conditions, the crisis and operations teams went to the location of well number 2. Access to the crown of the well with the basket by the "Crane" of the "Champion" ship was not possible due to the very unsafe conditions of the platforms, dark weather, sea breakage and the dangers of oil and gas leaks, and continued work was postponed to morning and daylight.

Lack of stairs to a high altitude, lack of mooring, unfavorable weather conditions and sea breakdown, risk of explosion and fire due to the proximity of the ship's chimney to the oil and gas leak, etc. were among the most important challenges and limitations of this operation.

All planned routes to access the crown from the sea were considered despite the high risk, which unfortunately was not successful, so the last possible route was by air, which had to be implemented.

In this regard, the helicopter operation was successfully completed with the experience of Pasco helicopter pilots, and Messrs. Majid Asgari and Milad Razavi, well-trained members of the well services and Soroush platform, boldly and selflessly stepped on the central platform helipad. (This platform is connected to the well platform of well number 2 with a bridge.)

The leakage operation on the well started with a very high risk by sending the required equipment to the platform through this way, and after about three hours of uninterrupted effort on the crown well valves under heavy oil and gas rain, fortunately without any accidents and with Complete success achieved. Throughout the operation, wind and oil and gas leaks were considered to minimize the risk of doing the work.

This operation was carried out under the direction of production management at the headquarters and its direct command on the scene by Engineer Rajabkhani, the head of Kharg region, which fortunately prevented a national environmental catastrophe and can be used as an experience in other operations and crisis management. .

It is worth mentioning that planning is underway to renovate and renovate the jacket of this well by the repair ship "Champion".

Also in this operation, the history of well No. 2 containing information on drilling, completion, production, etc. and the latest condition of the well after the imposed war were extracted from existing documents. The causes of well leakage were identified. The Persian Gulf Export Terminal also had good logistical support for this operation, which was very useful in the direction of the operation.

Following this incident, the staff of the operation to control the eruption of well No. 2 in Soroush Square was appreciated.